Over a Zoom video interview, Christopher “C.J.” Wallace, Jr. holds up his dad’s jersey that almost eclipses Wallace and the entire computer screen. “It’s a 5XXL,” Wallace tells Billboard. On the back of the jersey, ‘POPPA” is stitched in bright yellow letters against the hunter green fabric.

The young entrepreneur was only five months old when his father, The Notorious B.I.G., was killed. Now 23, Wallace has finally done something he says he was “very scared of for the longest time”: releasing his own music, inspired by his dad’s. “I just avoided it because you don’t wanna mess up anything great,” says Wallace.

Born in New York City and raised in Los Angeles, Wallace has been in the process of building his own legacy with Think BIG — a social impact company that he co-founded with business partners Willie Mack and Todd Russaw. The company advocates for cannabis legalization, criminal justice reform and the reinvestment in communities most affected by the over-policing of marijuana.

Under the Think BIG Umbrella, Wallace, Mack and Russaw also created the Frank White brand, named after one of Biggie’s aliases. The brand is an outlet for the team’s creative endeavors, such as cannabis and wellness products, fashion apparel — and now, music. “All of the work and the products sold under the Frank White brand benefit the charities that Think BIG supports,” adds co-founder and marketing veteran Willie Mack.

The first music project, Ready to Dance, is a house and dance album reinterpreting some of Biggie’s most iconic tracks, without using any original samples. The first single off of the collection, “Big Poppa (House Mix),” debuted Tuesday.

In a Billboard exclusive, Wallace and Mack discuss their advocacy, the making of Ready to Dance, and why the album is dedicated to Black, brown and queer creatives. And as for C.J. Wallace, the budding executive shares how his projects are subtle nods to his late father, but maintains that his own “musical background is gonna come as we build this.”

Before the pandemic, you went to Governor Cuomo’s office in Albany to lobby for cannabis legalization. What was that experience like?

CW: That was crazy. I’ve never lobbied. It was intense. It reminded me of being on a set for the first time, but with fewer cameras. Everybody was watching and listening to what I had to say. I was super nervous, but it was fun. It helped me realize what we were fighting for on a bigger scale.

WM: Growing up through white supremacy, police injustice, and all of these things, we got a real sense of how our government works and what our government is doing to address those issues. Jason Ortiz, the president of the Minority Cannabis Business Association, was part of our team that traveled to Albany. Since Think BIG is so focused on legalization, we got the chance to dive in and talk about the connection between police violence and cannabis legalization. We need to talk about how these things were created to control our people and population.

Did your projects have to pivot during the pandemic when everything shut down?

CW: Our office space was shut down. We had an office space in downtown LA, but that whole coworking space thing just became nonexistent.

WM: Yeah, a bit. Supply chains have changed for CBD and THC products. Retail is shifting and changing and there was so much uncertainty, so we decided to work more on our music project to avoid sitting around and doing nothing. Making an album also didn’t require us to have something physical to put in stores. As a business and brand, we were thinking about what the world needed at this moment, and it was music.

What’s the inspiration behind Ready to Dance?

CW: Before we met our producer Jonathan Hay [of R.U.S.H. Music], the question was: what does Frank White sound like? I always wanted to do small skits and little stories that I have in my head, so I imagined what background music would soundtrack those scenes.

Releasing a collection of hip-hop tracks would’ve been the obvious choice. Why did you decide to make a house and dance album?

CW: I’ve always wanted to do something with my dad’s music, but I’ve been very scared of it for the longest time. I just avoided it because you don’t wanna mess up anything great. There’s only two albums, so there’s not a lot you can take from and recreate. As I got older and turned 21, I took a step away from music because a lot of people expected me to jump right into it and become a rapper and follow in my parents’ footsteps. I wanted to challenge myself before I ever touched any of his music, so I decided to get into cannabis. I just wanted my own strain. I didn’t think I would be an advocate and go out to lobby at the state capital. I never thought that in my life. Even before I met Willie, I was like, “How can I shock the world?” Doing this music project with Jonathan was a creative project that I never thought I’d do. Especially since it’s house music — a genre that I never got super into as a kid. I really only discovered house, EDM, and techno when I started going to Coachella with the kids I went to high school with.

So you got into house and dance music by going to Coachella?

CW: [chuckles] I’m not even gonna lie and say that I was into it at first. It wasn’t something that I was into, but I’ve evolved and it’s become one of my favorite genres.

Willie, how did you first discover house music and why does it make sense to mix it with hip-hop on Ready to Dance?

When we started doing research for this project, we found that house and hip-hop were happening at the same time. They were coming out of the 70’s, and were both inspired by disco and turntablism. These two genres were growing in the underground at the same time through the 80’s and 90’s, but never really crossed over. Now that hip-hop and house are two of the most mainstream music genres in the world, we wanna celebrate and remind people that these genres were started by marginalized Black, brown, and queer people who were just trying to have fun and express themselves. That’s what Frank White is about.

What was each of your roles in producing it?

CW: We’re all executive producers. I’ve got a couple vocals in there. My brother’s on there also doing some vocals, so we’re both technically artists. My younger brother did some production as well on some of the tracks. We were all over this s–t. Executives, producers, and artists.

WM: Same for me. As a producer, we wanted to balance house, hip-hop and techno. I have a few vocals on there as well.

Even though CJ is Biggie’s son, did the Frank White team still have to pay the record labels and publishers for using his sampled tracks?

WM: We didn’t use any of the original samples. The tracks on the album are covers of his music. Based on this, we still had to request permission from the estate, which is standard. On the project as a whole, we first had to get approval from the estate. Once that was done, we went through the standard rights clearances. The process varies by song and by company, some of which include Warner Chappell Music, Sony/ATV, Kobalt, and others.

Besides “Big Poppa,” what other Biggie covers are you sampling?

CW: Some of his most popular records are covered on it, like “Sky’s The Limit.” That’s one of my favorite records. I have a huge emotional tie to it. I still wish I could’ve been old enough to be in that video, but that’s a different conversation. “One More Chance,” also. And, “Mo Money Mo Problems.”

Will there be any unreleased tracks?

CW: Unfortunately, no. Not on this album. We can put that out into the universe. I’d love for someone to come out of nowhere to tell me, “I’ve got three unreleased verses.” I just don’t know yet.

Can you share any of the artists featured on the album?

WM: Not yet. It’s gonna be a surprise.

Ready to Dance is described as a “love letter dedicated to The Notorious B.I.G and all the Black, brown, [and] queer” creatives who fought to put their music into the world. How do you think the album is especially relevant in today’s cultural climate?

CW: Man, as a young, Black child of an artist who didn’t get his just due, I think this conversation is still being had today in the music industry. I feel like the artists are everything. The labels try to flip that on the artist and make it seem like they are everything for the artist. If all artists, especially back then in the 90’s, had the power to be independent, then they wouldn’t have to sign away all their rights to some label. Now we’re in a position where we can pick and choose who we wanna work with and who aligns with us.

WM: This year, the culture has shifted in a way none of us expected. This album is very timely. It’s dedicated to every single person that didn’t get their due and is still fighting to be recognized as creatives and innovators of the many genres we listen to and love. Since we’re independently releasing the album, it opens up the conversation surrounding the ownership of the creativity that someone put their heart and soul into, and then have it commoditized because that’s how the business works. Technology has allowed us to sell direct without going through the label system.

CJ, when you launched the business, you combed through your dad’s old belongings — specifically, his old clothes. What did you learn from that process?

CW: I’ve been looking at those jerseys since I was 13, and I was waiting for the day that my grandma would let me take them home, so I could look at them everyday. Last year, she finally called me and said she had all of his stuff and wanted me to have it. I’m so happy she did that because those jerseys are gonna be the base for the designs we do for our first fashion project. It’s not gonna be as big as my dad’s, obviously. [laughs] A lot of his clothes have been the real inspiration for us visually and we’ve used them as a guide to how he can be a part brand without explicitly showing his face. It’s much more subtle.

Do you ever feel overwhelmed by the legacy that Biggie left behind?

CW: As a kid, it was hard to comprehend how serious it was. When I was 18, I had to sit down with all the lawyers and accountants and sign all the paperwork for all the estate stuff. That’s when I realized how serious it was. My parents always reminded me: “You’re in a different position. You’re not like your brothers. You’re not like your sisters. You have a very unique situation you have to deal with, and it’s not really fair.” I have a strong support system with my parents and siblings, so I’ve always felt like we were gonna make it together. The pressure is always gonna be there. It’s really about how you respond to the pressure and what you leave behind. If I were to start rapping and telling my story at an early age, I don’t think there was a lot to tell. Or, even an interesting story to tell. It’s not like I grew up in Brooklyn and had to really figure it out. I definitely did not. My musical story, my musical background is gonna come as we build this. 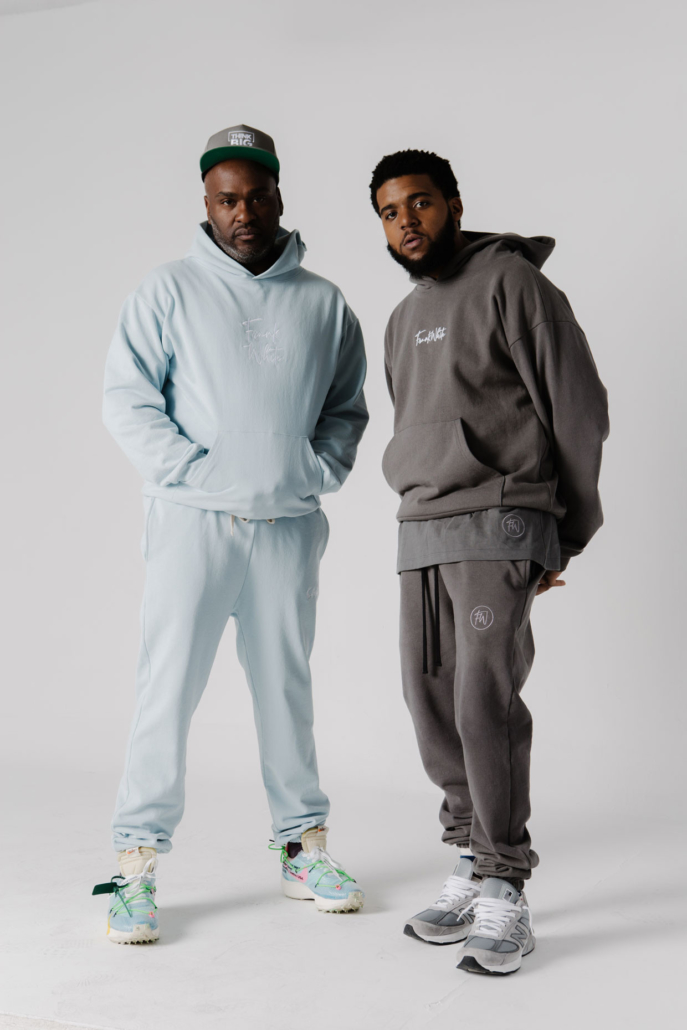