Hitmaker and prolific music producer Jonathan Hay’s latest project is unlike anything he’s done before: A cover album featuring 13 classic songs by the so-called “‘grunge rock” band of the 1990s, Nirvana, reinterpreted with a bass-heavy, electronic “House Techno” beat. But as wild as that sounds, there’s more: some of the vocals belong to a powerful, Black transgender woman who in many ways embodies the spirit of the late Kurt Cobain.

Her name is Daniella Carter, a 26-year-old marketing wunderkind and public speaker.

“Her voice is very soothing, very natural,” Hay gushed in a phone interview from Dallas. “I always tell her this, when we speak: I love the way she sounds, but that’s why I wanted to put her on a record, to have that same feeling. Like, man, the world needs to hear this voice.”

Carter will be heard on the first single, Something In The Way, Hay said, and she also appears in a music video for Heart-Shaped Box.

“Of course, for me, it’s a huge honor to have a multi-platinum producer giving me this opportunity,” said Carter. “It’s definitely a relationship where it doesn’t feel one-sided; this is both of us benefiting and helping to push the legend of LGBTQ inclusion and the way that Kurt Cobain did it.”

“I’m definitely gay in spirit, and I probably could be bisexual,” Cobain told The Advocate Magazine in 1993. Just a year earlier, Nirvana performed at a gay rights benefit in Oregon, and the band’s 1992 compilation album Incesticide included the following statement in its liner notes: a message supporting the LGBTQ community as well as opposing racism, sexism and misogyny.

“If any of you in any way hate homosexuals, people of different color, or women, please do this one favor for us: leave us the fuck alone! Don’t come to our shows and don’t buy our records.”

As for their sound, critics filed the band under a host of labels: Alternative rock, heavy metal with punk sensibility, and the aforementioned “grunge,” taken from the thrift-shop plaid shirts and torn jeans favored by the musicians and their fans. “Nirvana will be remembered for revolutionizing the state of rock ‘n’ roll in the 1990’s, pulling it away from a processed, rather synthetic sound and returning it to something more sincere,” Michael Azerrad, author of Come as You Are: The Story of Nirvana, told The New York Times in 1994.

In addition to her contribution to the making of the album, Carter is also handling publicity for Hay’s project, titled Come As You Are: Nirvana Reimagined as House Techno. Like many of his hits, this one is a collaboration of varied and eclectic talents from across the industry taking established classics and reinventing them for new audiences.

It’s a winning formula: Over 18 months in 2018-2019, Hay released five Billboard-charting albums, as Javier Hasse reported for Forbes.com These records hit more than 30 different Billboard charts in total, topping a number of categories from Jazz to Christian to “Heatseekers.”

“Two years ago, I did Eric B. & Rakim,” said Hay. “Rakim is considered by one of the greatest MCs of all time by people like Jay-Z and Kanye West. He’s always in the top half of rappers. Growing up as a hip hop head, I was a big fan. So I decided to cover Eric B. & Rakim’s Follow the Leader, reimagined as jazz. I took this classic hip-hop album and made it a jazz instrumental album. And I put it out on the same release date, 31 years from when they put it out, with the same track listings, with really no expectations whatsoever. It went number one on Billboard and it stayed on the Billboard 11 weeks.”

Not only that, but the debut of Hay’s Follow the Leader knocked Michael Bublé’s Love album out of its long-dominant top spot just one week after hitting the charts.

His new album features established multi-platinum and Grammy Award-winning contributors, including JPatt, one half of the acclaimed American electronic music duo The Knocks, producers Cain McKnight and Don Klein, part of the entertainment consortium Adastra Media Group, along with co-producers 41x and Sara Cooper.

For Hay, the hook to covering Nirvana in such a different way was Cobain’s support of the LGBTQ community three decades ago.

“I am not gay,” the singer and songwriter was quoted by Gay Star News as having said, “Although I wish I were, just to piss off homophobes.”

“I started to look into it more, and took a deep dive into Kurt Cobain and what he did for [LGBTQ people],” said Hay. “It just made sense to do Nirvana reimagined as House Techno.”

“Cobain and his legacy represented so much of what we don’t see happening right now, at least no major musicians or musicians of that caliber. They’re not speaking out about what the state legislators are doing and how they’re specifically targeting LGBT youth, and more so trans youth,” Carter said. “We want to remind the world that the legacy of this movement started way before the state legislators thought they could try to wipe us out, execute us, essentially, out of existence.”

Carter said a portion of proceeds from Come As You Are: Nirvana Reimagined As House Techno will go toward suicide education, prevention, and mental health, and LQBTQ initiatives.

After struggling with crippling stomach pain, the pressures of fame and a serious drug addiction, Cobain took his life in April 1994. He was 27.

His hometown of Abderdeen, Wash,, where Nirvana was born in 1986, remembers him to this day, despite his disdain for his neighbors. “It’s a very small community with a lot of people who have very small minds,” Cobain was quoted as saying. “Basically if you’re not prepared to join the logging industry, you’re going to be beaten up or run out of town.”

Contributor FORBES
Diversity, Equity & Inclusion
I am an award-winning journalist and host of the “RiseUP With Dawn Ennis” talk show and co-host of the “The Trans Sporter Room” podcast. I was America’s first transgender journalist in a TV network newsroom when I came out in 2013. Organizers of the 2018 NYC Pride March honored me as a community hero on the lead float alongside icons from the Stonewall riots. In addition to contributing to Forbes, I am managing editor of Outsports.com, I write for CT Voice Magazine and serve on the publisher’s advisory board. I also report for NBC News, The Daily Beast, Out Magazine, The Advocate Magazine and NewNowNext. I also teach news reporting and writing for the media at the University of Hartford. My children, our dog Dahlia and our cat Faith and I reside in West Hartford, Connecticut.
https://adastramediagroup.flywheelsites.com/wp-content/uploads/2021/05/960x0.jpg 641 960 Adastra https://adastramediagroup.com/wp-content/uploads/2020/11/adastra_logo_480.png Adastra2021-05-06 16:43:392021-05-06 16:43:39‘Come As You Are:’ Nirvana Classics Reimagined With A Trans Twist 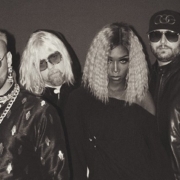 Want to join the discussion?
Feel free to contribute!

“At Night, The Disco Goddess”: Why Nirvana Songs Make For Killer...
Scroll to top