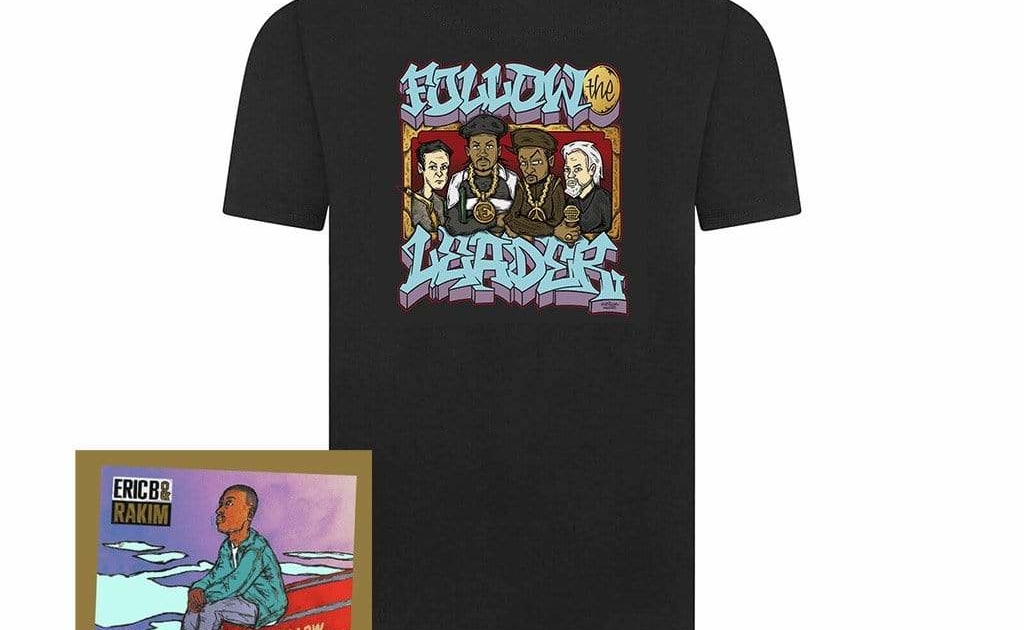 Follow the Leader (Re-Imagined as Jazz) is celebrating the 32nd year anniversary of the timeless masterpiece by Eric B. & Rakim with a limited edition Fat Beats exclusive T-Shirt and CD Bundle.

“Hearing the [Follow the Leader] tracks in a Jazz arrangement brings me back to the essence of the original.” – Rakim

When award winning record producers Jonathan Hay and Benny Reid decided to respectfully, faithfully, and creatively re-imagine Eric B. & Rakim’s classic 1988 album, Follow the Leader, there were some immediate challenges. How would they reflect the enormity of such a revered and iconic hip-hop album? How could it be translated to a jazz instrumental omitting the centerpiece of Rakim’s iconic voice? The answer came from The God MC himself. “My influence was John Coltrane — I played the sax, as well. So listening to him play and the different rhythms that he had: I was trying to write my rhymes as if I was a saxophone player.” (as told to NPR). Embracing Rakim’s evolution from instrument to voice and then flipping it back to an instrumental format, the producers organically morphed away from note-by-note replays and discovered a more improvised, classic jazz style sound.

“I couldn’t have done a better job myself and I created the original album (laughs). It’s a great body of work, and all the guys should be so proud of themselves. The simple way to put it is that life imitates art, and art imitates life, and it’s all coming around full circle. Like all of our music, when Rakim and I first sat down to write and record Follow the Leader, we took inspiration from our jazz icons in creating its signature sound. Hearing the music faithfully arranged and re-recorded with the stellar group of musicians brought together not only stays true to our original work but elevates and highlights the core concepts we drew from 30 years ago.” – Eric B. (as told to Forbes Magazine)

Follow the Leader (Re-Imagined as Jazz) was an immediate success, instantly becoming the #1 Billboard Jazz album and remaining on the Billboard Charts for 11 weeks. During that time, Jonathan Hay and Benny Reid signed a deal with Fat Beats and collaborated with Matthew Kemp, Rakim, and Eric B who served as executive producers to release the jazz album worldwide with Vinyl LP’s, cassettes and CDs. They also released a deluxe version of the album for digital platforms through Fat Beats with an additional three remixes including “Microphone Fiend (Quad Remix)” with DJ Whoo Kid and Sarah Rush.

“The trajectory of this project is the ultimate blessing, it’s tapping into a divine consciousness and showing how the universe continues to spin full circle. Eric and I were always heavy in our influence from the jazz genre. Then three decades in, we are influencing a jazz album, then that album is coming back around to influence hip- hop production greats like DJ Whoo Kid and hopefully a lot more. We used to dig through the crates at record stores to pull vinyl instrumentals and sample them for our tracks and now Follow The Leader is on vinyl for another generation to expand on with next level music. It’s breaking new barriers, which is the core of hip-hop culture” – Rakim (as told to HipHopDX)

Rakim is widely considered amongst critics as one of the greatest rappers of all time, with the same praise from rap heavyweights such as Kanye West, Drake, Jay-Z, Eminem, 50 Cent and more. Rakim opened up to Billboard stating, “When this band came together to use my voice and flow as inspiration and take it back to jazz instrumentation? That’s a full 360 along a cypher. It’s almost too perfect.”

The celebrations and re-imaginations don’t stop there. Jonathan Hay and the R.U.S.H Music team are currently working on Follow the Leader Electronic Evolution and are looking to collaborate with some of the biggest producers and DJ’s in the house and techno genre. Eric B and Matthew Kemp of Rakim & Associates will also be hands on during the production process of this groundbreaking venture.