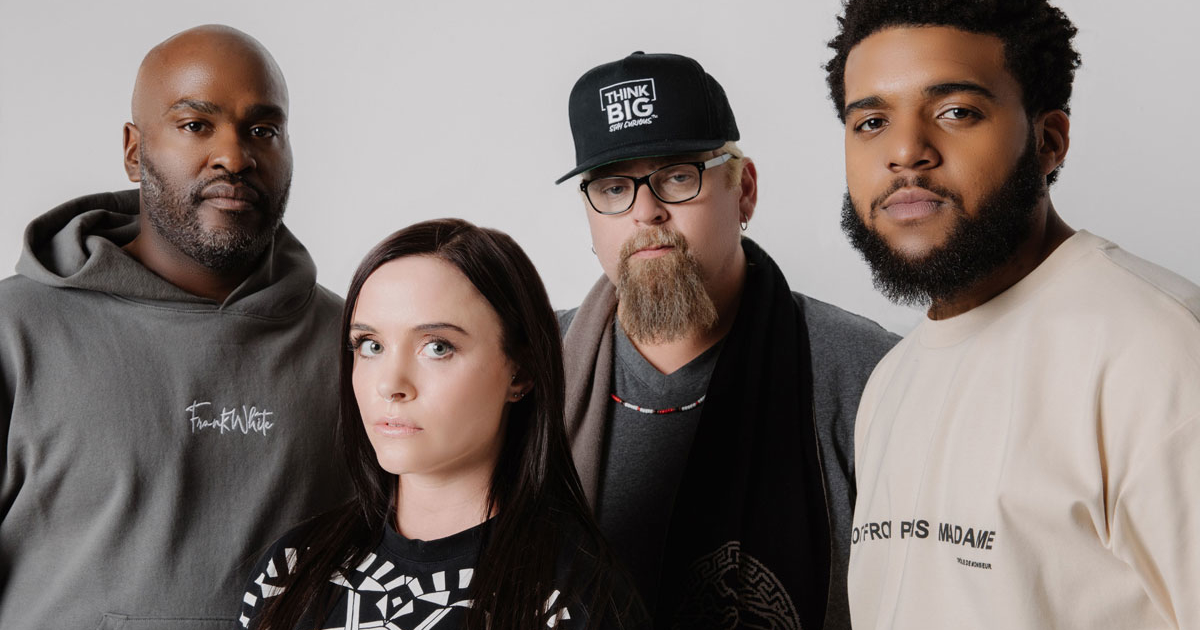 The Notorious B.I.G.‘s son is continuing the rapper’s legacy with a new album, Ready To Dance, coming this September.

CJ Wallace (pictured above, far right), the 23-year-old offspring of the late music icon and Faith Evans, has long been inspired by his father, choosing to follow in Biggie’s footsteps in the way he believes the rapper would have done if he were still here.

In addition to co-founding Think BIG, a movement to “challenge the world to equitably legalize cannabis and to embrace it as a tool to ignite ingenuity and has since become a true social justice advocate,” with Willie Mack (pictured above, far left) and Todd Russaw, they’ve created a new lifestyle brand, Frank White. Using B.I.G.’s alias, the trio “are creating a platform for fueling Black creativity and self-expression with music.”

This includes their upcoming project, Ready To Dance, executive produced by Wallace, Mack, and Jonathan Hay of R.U.S.H. Music (pictured above, second to right), which reimagines some of Biggie’s hits as house music.

Big Poppa (House Mix), the first single off the album, is set to officially premiere August 11, but you can EXCLUSIVELY listen to the intoxicating track early (HERE)!

CJ opened up about the album, too, telling us:

“This process has been an enlightening wake up call and an adulting experience for me. We always force ourselves to think bigger and more creatively about my Dad. When it came to his music, it was the same thing, not using vocals, but really thinking about his spirit and the emotional connection that his music gives to his fans. Ready to Dance allows us to create a new foundation for experiencing his music and other legendary musicians. This is what Frank White is about, cross genre collaboration with artists, musicians and producers to reimage the past for a new generation.”

For Willie, it holds a different meaning! Referencing how his passion stemmed from partying in Black and gay clubs around the world, he shared:

“This project is really special to me because I’m able to fuse the two genres I grew up with. Hip-hop with BIG as one of my top 5 and house music where I first heard Frank Knuckles. This built the foundation for my love of music as I partied in the underground black and gay clubs in New York, Detroit, Chicago, London, and Paris. Frank White allows us to share these stories with the world – a celebration of Black and Gay culture for me.”

Jonathan also added more about the track, describing the fusion of Biggie’s legacy being laced with the house genre:

“Our reimagination of ‘Big Poppa’ is laced with style and grace. With the original spirit of The Notorious B.I.G. spun into a new house classic. Dedicated to all the honeys getting money and the ravers dancing to the sounds from house gods like Martinez Brothers and Carl Cox, our aim was to create music that makes you wanna move and honor BIG’s legacy.”

So now that you’ve heard the track, sound off, Perezcious readers?? Did CJ meet your expectations as he makes his own name alongside these powerhouses??